Earlier this week, I submitted some posters to the digital communications office at University of Tulsa to display on the scrolling message boards that promote events all over campus. Just today, I noticed that they were displaying the one for tonight’s Living Last Supper, featuring two of the disciples from DaVinci’s masterpiece engaged in discussion, with the tagline “Everyone’s Talking about the Living Last Supper.” I had also given a poster with David Mach’s crucifixion sculpture (called “Die Harder,” yes, “Die Harder”) displayed in some cathedrals around London with the tagline “Embrace This” written, quite brilliantly, if I do say so myself, in ransom note font. I noticed it wasn’t scrolling too, but just figured they would be putting it up tomorrow. When I got back to my office, I noticed an email from one of the staff people in the student affairs office apologetically informing me that they had been running the Good Friday poster too, but a student called and was concerned that it was “too disturbing for display throughout campus,” and asking if it would be possible to submit another image for use with the promotion. 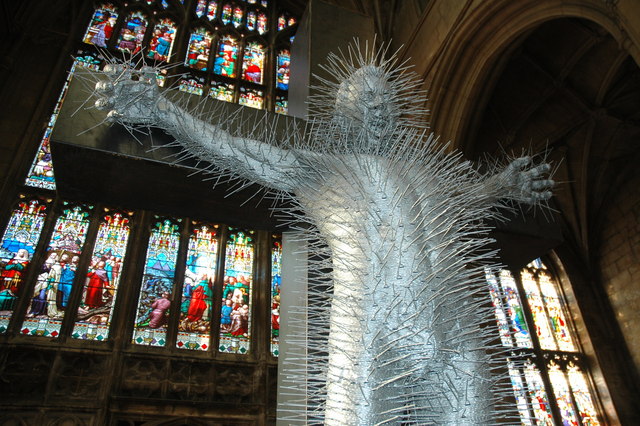 I was elated.  What a fitting response to the cross! I had just been speaking with a student leader at the Wesley foundation about the image over lunch (the International Student Ministries Lunch featured it on their announcement slideshow) and how I chose it because it is so gripping and different.  The ubiquity of crucifixion portrayals somehow works to defeat the power of the image, in a way.  We’re not really shocked by it, we might not even take a second glance at it.  But for some reason, perhaps because of the prickly coat hangers that protrude from the giant figure of Jesus, perhaps because of the utter agony on his face, this one is captivating.  We don’t just glance over it.  It prompts an emotional response, and is therefore great art.  Not that all those beautiful images of the crucifixion aren’t great art, but Mach’s piece makes a good case for themes continuing to be explored in modern conceptions.  If we’re no longer shocked by “conventional” crucifixions, then they have lost an integral aspect of their purpose.  “The figure of Christ is in pain and anguish pierced by thousands of spears, that single body acting as a conduit for all the cares and the woes in the world” says the artist talking of the lowly, humble coat hangers which pierce the figure, acting like a “language or currency common to us all”.
I’ve read that it is so captivating that it is quite a sensation in the UK, and is drawing people into churches to observe and just sit in its grip, and judging by the expanded works on the same theme,

And yes, I sent in another poster that I was using to promote Good Friday as well.  I never thought I’d see the day when a Salvador Dali painting was the “more palatable” option!  Now the familiar Christ of St. John of the Cross looms over a landscape with the tagline, “Larger Than Life,” inviting people to the Service of Darkness tomorrow night. 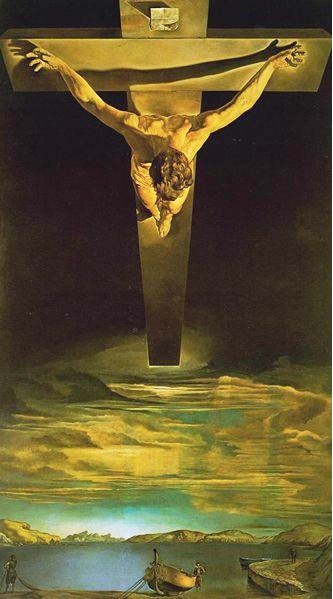